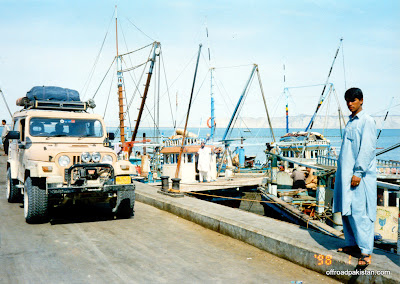 KARACHI: I have just got back from a 7-day, 3,000-kilometre trip through the coastal and southern region of Balochistan. There were 24 of us, in seven jeeps – all tried and tested members of a Karachi-based off-roaders club, people who scorn paved roads and are happiest when trundling along uncharted dirt tracks, preferably in low gear. Our journey took us from Karachi to Aghor Camp on the Hingol River, from there through the wonderfully named Buzi Pass to Ormara, then via Pasni to Gwadar, from there to Turbat, the headquarter of Makran division, and on via Hoshab to Panjgur, Awaran, Jhal Jhao, Bela and back to Karachi.

One member of our group, Wazir Ahmed, who was at boarding school with me at Burn Hall, Abbottabad, in the early 1950s (along with his younger brother, Iftikhar Ahmed, the well known cricket commentator), took a detour from Gwadar to Jiwani, rejoining the party at Turbat. Although the detour added an extra 180 kilometres to his route, Wazir still managed to make it to Turbat only 15 minutes after we got there – a remarkable feat considering that he was driving a 1941 model Jeep. The trick, said the redoubtable Wazir, whom nothing fazes, was to maintain a steady average speed of 60 kilometres an hour regardless of road conditions, come rain or shine, hell or high water.

Another member of our group, Dr Mansur Ahmad (aka “Doc”), a dental surgeon at the Aga Khan Hospital, who was driving a Chinese Jeep, had his vehicle’s top down throughout the trip, braving wind, sun and dust with equal aplomb, as did his strapping teenage son, Sikander, and the other five passengers. Several of the boys in Doc’s Jeep wore headgear that made them look like battle-hardened Palestinian freedom fighters. That impression was heightened when Doc donned a knitted mask on the run between Turbat and Panjgur to protect his face from the elements. Yasser Arafat would have felt perfectly at home with Doc and his crew.

A third member of our party, Taimur Mirza, who runs a factory in Korangi that manufactures upholstery fabrics, drove a CJ-7 Jeep. As frequent visitor to the scrap merchants in Sher Shah, Taimur’s favourite hobby is looking for pieces of secondhand machinery to buy. Compressors, generators, Jeep engines, gearboxes, altitude meters, digital sound systems are all equal grist for his mill. “Kya piyari item mila hey,” he will say delightedly whenever he finds yet another likely looking gizmo to buy.

His other hobby – if one can call it that – is to go racing off ahead of everyone else on off-road trips, leaving the other vehicles to follow as best they can. This trip, too, proved to be no exception in this regard. Whenever the cry went up “Where’s Taimur?” back would come the answer “Somewhere up ahead.” If one hadn’t kept him in check, or tried to at least, he might well have been in Central Asia by now, heading for Outer Mongolia.

My cousin Hamid Omar, the guiding light behind our off-road trips, and an expert on all things mechanical, drove a Jeep Cherookee on this latest trip of ours. For four years running in the late 1990s, the Cherokee was voted the best off-road vehicle in America. But Hamid’s younger brother, Ahmed Omar, who also owns a Cherokee, jokingly insists that the Cherokee is only meant for driving to the airport! Small wonder, then, that Ahmed, too, chose to drive a CJ-7 Jeep on this trip, a vehicle that he always referred to in our chit chat along the trail as “The Most Powerful Jeep.” Said Ahmed with a chuckle, “When every other Jeep gets stuck, I’ll be the one who’ll have to pull them out.”

And that’s just what he had to do on one occasion on this trip when the Ford Bronco being driven by Hamid’s younger son, Abid, with me as a passenger, got stuck in the mud halfway up the Buzi Pass. To be fair to young Abid, however, who is an excellent driver, it has to be said that the person at the wheel of the Bronco when it was being towed out of the ruts and nearly tilted over backward at one point was another member of our group, Amjad Mawaz.

Amjad, who lives in Islamabad, belongs to a family of polo players. His father, the late Brigadier Gul Mawaz, was a well-known player in his day, as was Amjad’s elder brother, Javed Mawaz. Javed’s son, Taimur, followed him into the game. Amjad, himself, still plays an occasional game of polo, managing to hold his own against younger players even though he is now in his fifties. As a former polo player myself (I played for my school team in England in the mid-1950s), and as someone who is now in his sixties, I know only too well what getting on in years can mean. The spirit, as they say, remains willing, but the jolly old flesh tends to become fleshier and fleshier,

Hamid’s elder son, Khalid Omar, a quiet, studious sort, who is into computer programming and Russian literature, drove an M-38 Willys Jeep. Hamid bought this 1940s model Jeep some twenty years ago, fitted it with a diesel engine, a new gearbox, air-conditioning and a remote-operated winch, painted it white and made a lot of other modifications to it. It’s an amazing machine, going where other four-wheel-drive vehicles can’t go and taking even the tightest of hairpin bends with a cheerful insouciance that leaves the drivers of other vehicles gaping. We didn’t encounter too many such hairpin bends on our trip through Makran. Had we done so, however, the Willys, I’m sure, would have taken them in its stride.

Excellent security arrangements for our trip were made by the Inspector General of Police, Balochistan, at the request of his Sindh counterpart, Aftab Nabi, who has been a friend of mine for more than thirty years and who very kindly wrote to the IG Balochistan informing him about our visit. The police officials we met along the route were kindness itself and went out of their way to look after us and show us around. In this connection, particular mention must be made of SHO Ormara Mohammed Ilyas, ASI Ormara Abdul Hamid, SP Gwadar Manzoor Hussain, DSP Gwadar Abdus Samad, SHO Gwadar Mohammed Rafiq Lasi and the SHO Turbat. The Coast Guard officials with whom we stayed a night at Aghor Camp also extended every courtesy to us, for which I would like to thank them and their chief, Brigadier Zafar Mahmood.

My mentioning these security arrangements should not be taken to mean that the region we travelled through is unsafe. In fact, it is one of the most peaceful parts of the country, where the inhabitants carry no weapons and where crimes of violence are virtually unknown. It is also a region of incredible beauty, with huge vistas, fantastically shaped mountain ranges, deep canyons, windswept uplands, gorgeous sunsets and green oases that loom up suddenly out of the haze like a scattering of emeralds set in some gigantic diadem of bronze.

Some parts of the region resemble a lunar landscape, empty of human habitation but possessed of an almost mystical beauty. Others look like the Grand Canyon, with huge cliffs and gorges stretching in every direction. In places the resemblance to the Grand Canyon is so uncanny that one half expects to come upon the legendary prospector Yosemite Sam around a bend in the road, hauling a load of gold nuggets on his burro to a hideaway in the Hole-in-the-Wall.

This is not as fantastic as it sounds. The story goes that back in the 1640s, the Portuguese colonists at Goa fashioned a 20-foot gold cross and were taking it to Portugal by ship as a present for the king. Sailing close to the coast, as mariners tended to in those days, their ship was attacked by pirates near Gwadar and driven on to the beach. The ship’s crew was able to salvage the cross and set off with it into the interior, hotly pursued by the pirates. The crew managed to give the pirates the slip and are said to have buried the cross somewhere in the sandy wastes behind Gwadar, with the intention of coming back for it later.

No one knows what became of the crew, but local legend has it that the cross is still buried out there somewhere. At today’s price of gold, it must be worth hundreds of millions of rupees. I cannot vouch for the veracity of the legend, but it makes a nice story. If J.K. Rowling were ever to write a book about it, she could call it “Harry Potter and the Cross of Gold”. The Portuguese attacked Gwadar in 1651 and burnt the town. Could this have been because they were looking for the missing cross and were furious at not finding it?

Of such musings is life on the trail made, especially on the sort of lonely trails that took us into the heartland of Makran. These are trails where you can go for miles without seeing another human being and where you have only the hiss of the wind for company. The landscape – a hauntingly beautiful panorama of distantly glimpsed valleys, mysteriously changing colours, and range upon range of mountains – invites the imagination to wander. One thinks of Alexander’s legions marching through the region on their way back to Greece. One thinks of Nasir Khan I, the Khan of Kalat, who, in the late 18th century, handed over Gwadar, and about 300 square miles of adjoining territory, to Sultan Said, a brother of the ruler of Muscat and Oman. This was a land before it was a people.

FWO construction camps dot the side of the road. The camps are elaborate affairs, complete with residential and office trailers, workshops, overhead water tanks, communications systems, wireless antennas, generators, first aid stations and even an occasional volleyball court. The whole operation seems to be proceeding like clockwork, with work going on until late in the evening.

If the FWO is able to maintain this rate of progress and work doesn’t slow down for want of funds, the Karachi-to-Ormara section of the road should be ready in about two years time, despite the fact that the route passes through some very tricky terrain where even a light shower can turn the ground into a sea of mud.

When one of the vehicles in our seven-Jeep convoy turned turtle along a raised section of the road on the first evening of our week-long trip, several FWO trucks suddenly appeared out of nowhere, and out jumped a couple of dozen men who proceeded to set the Jeep right in a jiffy. They didn’t leave until they had assured themselves that everybody in the Jeep was okay and that we could continue on our journey. For their kindness and help, I thank them.

Aghor Camp, on the Hingol River, where we stayed the first night at a Coast Guards post, is a lonely, windswept place. The wind blows hard here, reaching gale force at times. Sand swirls about in the air, funneling through the gaps in the surrounding hills and getting into everything. For all that, however, it is a beautiful spot, with a primeval kind of beauty. The nearby river contains some deep swimming holes, the water an incredible blue. One swimming hole, under a cliff, is said to be sixty or seventy feet deep.

The next morning we crossed the Hingol and headed for Ormara on the coast. The journey took us through the Buzi Pass, past deep gorges and towering mud cliffs. It was a long haul, made longer by the fact that we kept stopping every few miles to take pictures of the beautiful landscape.

13 thoughts on “Gawadur 2001: Concerning a journey through coastal Baluchistan”