The journey was broken up into three parts:

A two hour journey was filled with most of the occupants in the jeep I was traveling in, vying with each other to take the best photos of the lush scenery.  Think Malibu Palm trees meets route 66.  (A strange combination I know but the only way I can describe it).  Two hours later a welcome cup of Pakistani Chai and nicotine (for some) set us up for the second leg of our journey. 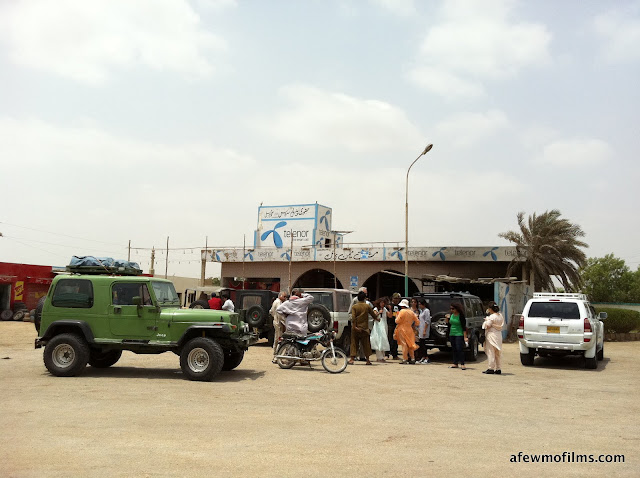 I have never seen lorries so miraculously filled up with straw, it was like Mr Stay Puff meets magic mushroom clouds. .  To an outsider all aspects of our journey was met with wonder and awe as to the daily lifestyle of these people. 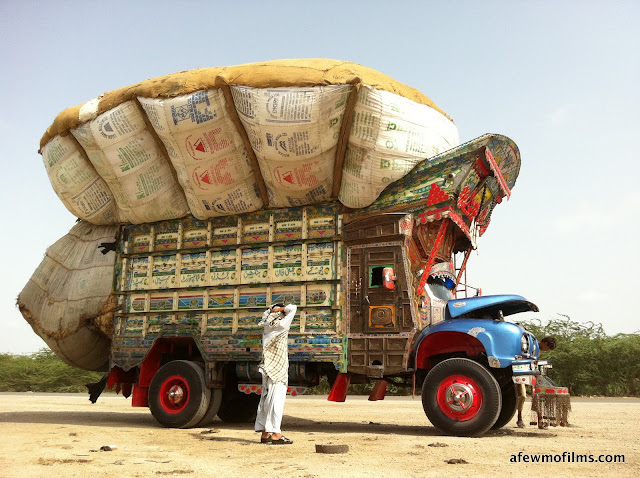 Our second pit stop took place at an oldie worldly diner.  Which within ten minutes of our arrival came up with lunch fit for a rajah.  Around thirty people commandeered the VIP room and ate and drank and were merry.    Once again nicotine and tea took the place of after dinner mints and we continued on the last leg of our journey.

To say the roads were bumpy were, I have to say an understatement.  How people who did not have off road vehicles managed is a mystery.  (People of England take note, you have nothing to complain about in  relation to the conditions of the roads).

We arrived at a lovely Farm House, courtesy of one of our  party.  Those people who think that this involved some ramshackle farmhouse with no amenities, think again.  Pakistan does luxury with the best of them.  Full bedrooms and shower facilities were on tap.  For those who wished to have a swim before dinner and planning meetings, the local river was a great place to play a gusto game of water soccer (thought up by yours truly).  One thing to remember is never to let ‘Doc’ be on the losing side.  That great man took pebble skimming to a new level.

After a absolutely fantastic dinner (I cannot even begin to describe how yummy it was), everyone sat round a camp fire and discussed what the plans would be the next day.  At two am, people were still discussing the best way of providing aid.  Fortunately there was plenty of medicine to provide cures for headaches the next day. 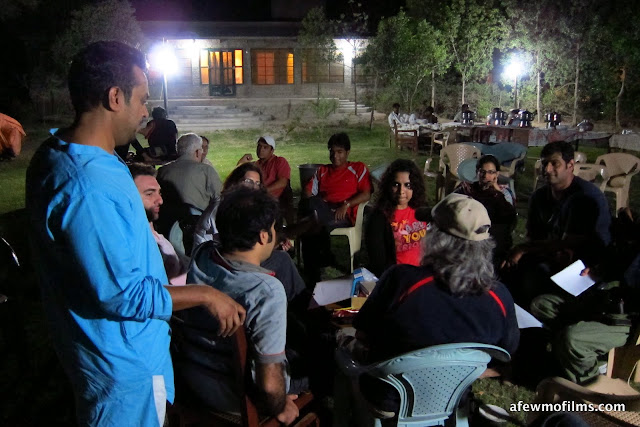 After being woken up at dawn (thank you very much to the resident cockerel!) everyone set to work setting up the various medical sections (which I might add was set up in record time, big pats on the back all round).  We were ready to face the masses (900 patients in total).

Yours truly was trusted to help dispense the drugs on the pharmaceutical side.  (One poor lady obviously misunderstood that our drugs were medicines and not the narcotics type, so one unsatisfied customer there!).  My knowledge of drugs has increased hundred fold, although I don’t think that the Royal College of Pharmacy is ready to give me an honorary degree just yet!.

Together these remarkable doctors, dentist , psychiatrists and vets, gave their valuable time and skills to help the surrounding villagers and children (a big thank you goes to Dr Mansoor, one of the leading maxillo facial surgeons of Pakistan).  One great character and a real people person). 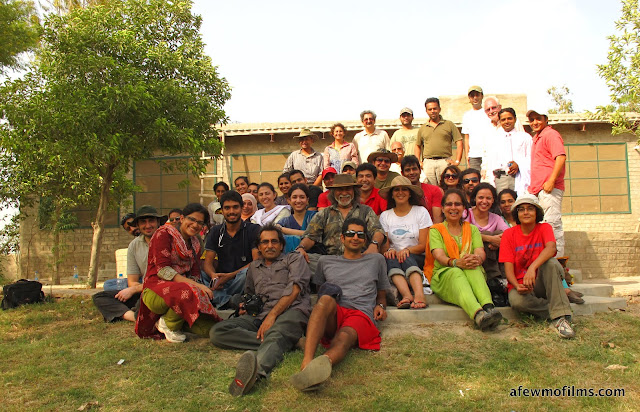 I was particularly impressed by how well everyone pulled together to make a truly remarkable team.

From an outsider’s point of view (living in a country such as England) it was a truly remarkable experience to be a part of such a worthwhile cause.  I have been fortunate enough to visit Pakistan on a regular basis (so much so that I now have a ‘NICOP’ card.

Although I have contributed generously to its fashion and jewelry economy (thank you papa) it was something else to be an actual part of really helping the people of Pakistan.  I came away feeling truly humbled and feeling that I had done something worthwhile.

I personally cannot express my admiration for the hard work and dedication that the Off Road Group of Karachi.  900 patients hopefully left that day feeling that a few good men (and women) cared enough to help them.  Something that perhaps Governments can learn from ?

I would now like to move on to something equally as worthwhile.  PAWS!!, Pakistan Animal Welfare Society.  Founded by one plucky and determined young lady, Mahera Omar, the daughter of one of the Founders of the Off Road Karachi Group.

This remarkable young lady was one of the co-founders of PAWS, set up in 2004 and registered in 2008.

Based in Karachi, this group’s aim was, and indeed, continues to promote compassion towards the animals (big and small) of Pakistan.

Ms Omar had heard of a local Government shooting and poisoning street dogs as a barbaric method of controlling the dog population.  Something which has not worked.

Ms Omar herself sets out that “PAWS advocates a humane stray dog management strategy which means one would spay and neuter the dogs and then release them back in the streets”.  In addition Ms Omar then went on to say that this strategy is indeed recommended by the World Health Organisation, (WHO).

PAWS relies on volunteer vets to support their cause.  Currently there are no staff, clinics or facilities yet but this is “something that we are working on”.  Indeed I have no doubt that Ms Omar will succeed in this.

People will no doubt recall the floods of 2010 in the district of Sindh.  PAWS put together a team of volunteer vets from private veterinary clinics and other organizations who also donated their time and skills.  PAWS then went of flood relief missions to interior Sindh and primarily the district of Thatta.  The aid that was given was invaluable.

One year later, PAWS came together with the Off Road Pakistan Medical Camp In Khorwah, which yours truly helped with.

With Ms Omar was Dr Otho (off the Private Hospital in Karachi) and his assistant Ali.

Together these enterprising and dedicated team went across the neighboring villages giving aid to the local livestock.  Two local stock assistants also assisted.  In case anyone is wondering what a stock assistant is, it is a self taught vet.

Ms Omar quoted that “it was a great opportunity for the villagers and stock assistants to learn from city vets on how to keep their precious livestock (the lifeblood of a village) healthy and live longer.  A death of a buffalo can mean the loss of 100,000 rupees.  Something that a villager can ill afford”.

Ms Omar’s observations were that the animal livestock management of these villages was poor, lack of education, organization and funding meant that the animals were often, dehydrated and malnourished.  Simple things like providing, adequate water and shade were not being undertaken.  This of course leads to illnesses, lack of reproduction and eventually a slow and painful death, depending on what particular illness the poor animal was suffering from.

One interesting fact that came to light was that every year, all the domestic chickens would die of some contagious disease.  When asked by Ms Omar and Dr Otho, local vets reported that there is a lack of medication and horrifyingly, the medication that is received is ‘fake’.  Often vets would have to travel long distances to purchase medication, often expensive, which villagers can ill afford.

Ms Omar went on to disclose that Local Governments are not providing the service that they should,  for example, vaccinating the animals, in some cases some villages have not had a visit from a vet for 10-20 years.  An alarming thought.

Ms Omar would like to see some radical and necessary changes made.   Such as Governments providing education and funding to the villages to maintain and keep their stock.

It does not simply end with an animal dying, most of the time, people are eating a diseased animal which of course is leading to illnesses, which has a knock on effect of the number of people needing medical aid, which is simply not getting to them, whether it be lack of funding or lack of resources.

It is a human right for everyone to be able to have, clean water and food to be able to survive.  Thanks to these organisations and the wonderful people who give their time and skills, this right can eventually become a right and not a privilege.