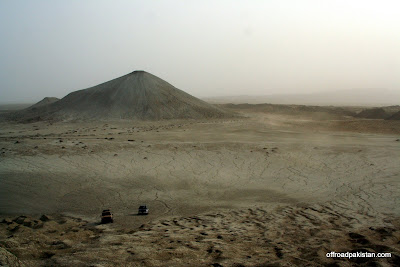 At the milestone “Aghore 42 Kms” on the Coastal Highway driving towards Ormara/Pasni a small sign post on the left indicates the track for “Sapat Check Post” of the Coast Guards. Visible from the highway on a clear day, one can see the tallest mud volcano in the world. ‘Chandragup’ standing at nearly 500 feet in height, the magnitude of its immense size gets noticeable as one gets closer. The second volcano ‘Ramagup’ also becomes visible, at nearly 250 feet with a massive crater in the center filled with greenish-brown water bubbling every once in a while.

Mud volcanoes are essentially channels for releasing pressurized gas and mineral water, sometimes with traces of oil, together with associated mud from great depths (8­12km) and depositing them on the surface of the earth where they form mounds ranging from 5 to 500m high. In both appearance and behavior, they outwardly resemble a magmatic volcano. The explosive release of pent-up gases combined with the burning of hydrocarbon gases adds to this similarity. But, unlike their magmatic cousins, which carry molten rock or larva or enormous heat to the surface, the mud volcanoes in the Hingol National Park are at ambient temperature and may even be cool.

The Oceanic crust of the Arabian Sea which is part of the Arabian Land mass has been trying to push under the Eurasian Land mass which is the mainland of Pakistan/Iran. This process in geological terms is called ‘subduction’. The Arabian Land mass being extremely rich in hydrocarbons has gas deposits accumulated near its Eastern side: the subduction zone while, the Central and Western zone has vast quantities of fossil fuel reserves. The trapped gasses, normally, methane escapes through cracks and fissures emerging on the sea floor as well as on land bringing along sub soil water mixed with sediments. At times the escape force is very great and huge islands emerge along the coast of Pakistan like the one near Malan in 1999 but washed away with the tidal flows soon.

The eruptions along the coast on land however, at times continue for hundreds or thousands of years and the deposits of mud along the sides keeps increasing the height. One can thus imagine how long it took Chandragup and Ramagup to attain the height they stand at today.

The Mud Volcanoes being there for countless number of years are on the route to Hinglaj Temple some 50 Kms further have attained a religious importance also. Devotees and Pilgrims proceeding to Hinglaj on Camel backs used to break their journey here and made offerings of coconuts. By throwing a coconut in the Greenish/Brown water which bubbles due to the escaping gasses was seen as a sign of approval of the pilgrimage.

The Makran Earth Quake of 1945 which claimed the lives of nearly 4000 people and destruction of property in the towns of Pasni and Ormara and scores of other fishing villages along the coast. A Tsunami was generated due to this quake causing considerable damage along the coast of Gujarat now in India, the tidal waves hit cities as far as Bombay and Oman. The fault line runs in a West/East direction towards Karachi and turns in a North/South direction in the Arabian Sea passing under Gaddani and Sonmiani. Minor faults emanating from this major plate boundary have been the cause of tremors felt on the coastal belt of Karachi (18 tremors) prior to the devastating Earthquake in the North of Pakistan last year. It was also observed that these tremors stopped after the October 8th Earthquake suggesting an ease of pressure along this fault. An account of a very interesting adventure to the devastated region undertaken by two RAF officers then stationed at Korangi Creek Base in Karachi is filed under Mekran Diary.